The badge pictured here was issued to all Hollis Police Officers from 1973, when the department first began as a full-time, twenty-four hour department, until 1988, when the department moved to new facilities on Silver Lake Road. The badge is a standard design, produced in bulk by the manufacturer. The only distinctive aspect of the badge is the department name and the state, which are engraved upon it. Many departments used this exact same design during the era of 1960 to 1990. Its popularity has since begun to decline.

The Hollis Police Department purchased new badges for all sworn personnel in 1988. The design is similar to those used by the larger departments in the country (Los Angeles, Atlanta, and Miami), and are the same two-tone gold and silver for all ranks. Each officer is issued three badges-a shirt badge, a coat badge, and a pocket badge. Featured in the center is a full color seal of the state of New Hampshire, and also included is the rank, the town's name, and the officer's shield number. We continually receive compliments on the appearance and distinctive shape of our badges. 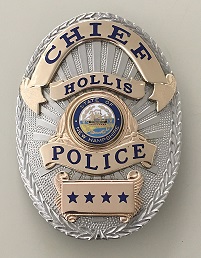