The Hollis Police Department has been in continuous operation since the late 1890's when each New Hampshire town appointed a sheriff, whose responsibility was to establish and maintain law and order.

"Daniel Hayden was the first police officer and town reports show him having served from April 7, 1885 to April 14, 1896, when he was appointed Chief. He and his horse, "Dancing Dick," were well known to townspeople.

The old-times tell that because of the small population and lack of automobiles, problems involving law violations were minimal. Many of them involved local pranksters especially around the fourth of July or Halloween when a sort of game was played between pranksters and farmers involving the stealing of watermelons and pumpkins, the farmer having loaded his gun with rocksalt. Quite often farm wagons were moved and various items placed on the common and on the horsesheds. The kids (some were old enough to shave) had a lot of imagination.

Hollis had its own police court for a time. Judge Denton Lates presided from 1958 to January 1, 1965, when the legislature closed down the town courts and set up the present district court system.

Expenses listed in town annual reports were varied. None are listed from 1877 through 1880, however $2.25 was expended in 1881 for a police badge. In 1894, Charles W. Hardy who assisted in getting drowned bodies out of Rocky Pond was paid expenses of $3.90. Henry Hildreth's grandfather told about these poor accident victims who had earlier stopped at his store asking for directions to Rocky Pond.  After being told how to get there, they seemed unsure whether they could find it. He said later, he guessed they did find it--they were drowned! (An airplane pilot died in the same pond in 1962 when his plane fell into the water.)"

Throughout the first half of the 20th century, the Hollis Police Department consisted of a part-time chief, and varying numbers of part-time patrol officers. These officers used their own cars as patrol vehicles, and operations were conducted from their homes. Since there were no police radios at that time, emergency calls went to the Hollis Telephone office, and the operator on duty would pass the call on to the officer who was on duty via telephone. 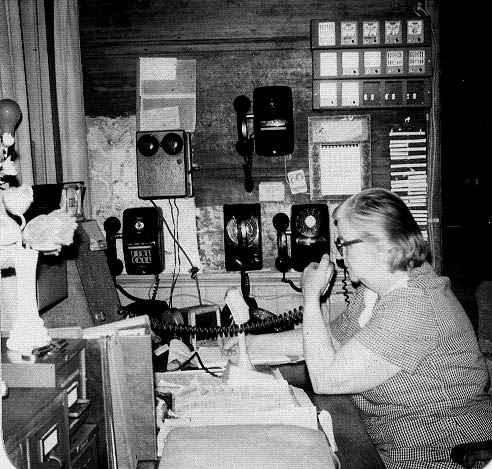 In 1974, the Board of Selectmen appointed Paul Bosquet as the first full-time Chief of Police. At the same time, the Ever Ready Engine House, also known as the G.A.R. building, was established as the first Hollis Police Station and Communications Center. Chief Bosquet oversaw the transition to 24 hour police patrol coverage and launched the Hollis Concept, a federally funded community crime-prevention program in which the police department, town officials, and citizens engaged in personal community responsibility and crime prevention initiatives.

During the 1970's and 1980's, the Town of Hollis, like most of southern New Hampshire, experienced a phenomenal growth in population, forcing schools and other municipal services to grow at a similar rate.

In 1988, the town meeting authorized the construction of a new police facility, and that became a reality in January of 1989 when we moved to our new station. The facility was extensively renovated in 2005 which expanded it's usable space to over 10,000 square feet.

The Hollis Police Department now consists of fifteen full-time police officers and several civilian employees. Our rank structure consists of a Chief, a Captain, a Lieutenant, two Sergeants, one Detective and nine Patrol Officers, which includes those holding the rank of Master Patrol Officer. Included in our ranks are Use of Force and Firearms Instructors; a D.A.R.E. Officer; a School Resource Officer; and a Mountain Bike Unit. We are a full service, 24-hour-a-day department, serving a community of more than 8,000 people, as well as four public schools.