HISTORY OF THE D.A.R.E. PROGRAM 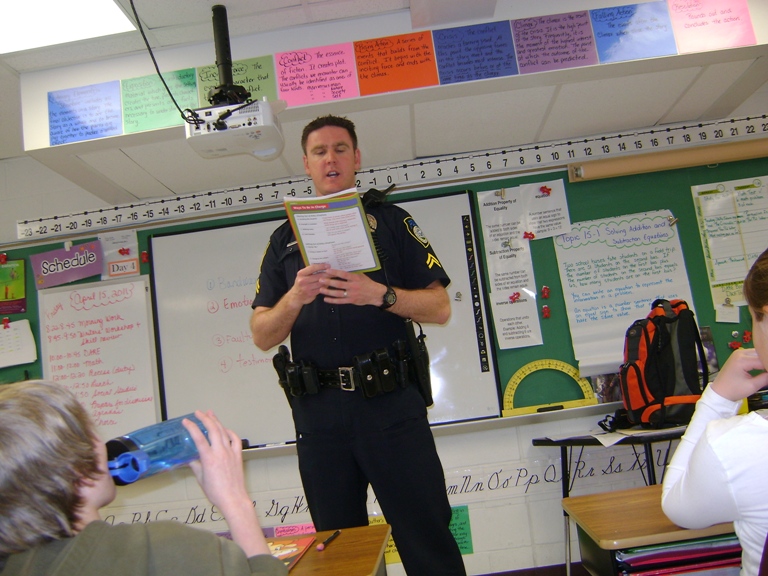 In 1983, facing an overwhelming drug problem among juveniles, the Los Angeles Police Department, under the direction of Chief Daryl Gates, decided a new approach to fighting drug use was needed.

The Los Angeles Police Department worked with the Los Angeles Unified School District and created a program for 5th and 6th grade students. The program is called D.A.R.E., which stands for Drug Abuse Resistance Education.

The course is 17 weeks long and is taught by a uniformed police officer. The D.A.R.E. officer normally goes into the school once a week and teaches an hour-long class. The classes are conducted in the studentâ€™s classrooms, so they can have more contact with the police officer.

The course is based on a structured curriculum and covers such topics as drug use and misuse, consequences of behavior, resisting peer pressure, ways to say no, increasing self-esteem, media images of drug use, positive role models, and support systems.

The course was successful and well accepted in the Los Angeles community. From there, the D.A.R.E. program slowly began spreading across the country. D.A.R.E. is now being taught in every state in the United States and is also being taught in foreign countries. The D.A.R.E. program was turned into a non-profit corporation to help keep the program regulated. The program is standardized, so no matter where a student takes the D.A.R.E course in the country, they receive the same information.

Becoming a D.A.R.E. officer is not easy. First, the officer must be chosen by his or her police agency to attend the training program. The officer must then complete an application and pass an oral board examination at the New Hampshire State Police Headquarters. The board consists of educators and police representatives. The interview ranges from the officerâ€™s background to hypothetical situations which a D.A.R.E. officer may be faced with. If the officer passes the oral board examination, then they pass onto the training phase.

The training phase consists of a two week, live-in course. Because the course is standardized, it is possible the officer may attend the school anywhere in the country. The demand for D.A.R.E. officer training in New Hampshire has reached the point where a training course is held yearly within the state. It is common to have officers from around the country in the class.

The two week course is hands-on and intense. Starting out the first morning, the class is divided into teams. For the remainder of the course, you work as a team. The days are filled with classes about teaching methods and the way kids learn. Each of the 17 courses is taught to the officers by a current D.A.R.E. instructor. During the demonstration of the lectures, the officers are asked to think like 5th and 6thgraders and ask the appropriate questions. This allows the new D.A.R.E. officer to see the program from the studentsâ€™ eyes.

In between the classes, time is spent doing endless assignments. As a team, the officers are asked to create songs, act out skits and give speeches. Meal times are spent discussing the classes and the upcoming assignments. The days last from early morning until 8:00 or 9:00 PM at night.

If the officer survives the two weeks, then he/she has the honor and distinction of becoming an official D.A.R.E. instructor.

For D.A.R.E. officers, the two week training is just the beginning. Yearly, the officers must attend additional training to keep the officers up-to-date on D.A.R.E. issues and changes in the curriculum. The officers are also monitored at random by the State of New Hampshire as they conduct their classes.

Recently, D.A.R.E. has been criticized for not doing enough to stop drug abuse. D.A.R.E. has been successful since the beginning and continues to be successful. D.A.R.E. is spreading across the country at the rate of 250 to 300 new communities every year. In 1996, New York City and Washington, DC both approved the program and began implementing the program. Over 30 different independent studies have been conducted which show D.A.R.E. to be an effective program in preventing drug use and violence. D.A.R.E. has proven to have positive short-term effects. The problem comes when communities fail to follow up as the students pass onto junior high and high school.

It does not take national studies and expensive research to know that D.A.R.E. works. Every year that we have taught D.A.R.E. in Hollis, students and parents have come forward to tell us how the D.A.R.E. program has helped them and changed their lives. At the year end evaluations, experienced school teachers repeatedly comment that they can notice the positive changes in their students after the D.A.R.E program has gone through their class.

The D.A.R.E. program works. Is there more, which could be done? Sure, every community could do more to fight drug abuse and violence. If we will ever win the "war on drugs", we need to focus our energy on adding to what we already have and not waste time looking for something we can blame for our problems.

The drug problem is a problem for us all. It is only when the police, schools, parents, and the community work together that we will be able to make a positive change for the long term.

If you desire further information about the D.A.R.E. program, or want to know what you can do to help fight drugs, please call D.A.R.E.  Officer Richard Bergeron at 603-465-7637.